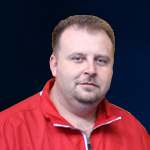 Major Accomplishments as a Instructor:

Master Simmons goal is to instruct students in the art of Tang Soo Do and pass on the teachings of his instructors to make students the best that can be, sometimes better than they think is possible.